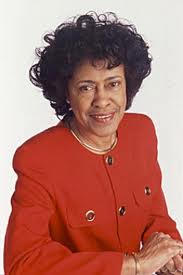 Born in Gaffney, she was a daughter of the late Deacon Conn ington Wood and Jeannie Marie Huskey Wood. She was a 1958 graduate of Granard High School and obtained a B.A. degree at South Carolina State College and MBA degree at Columbia University Graduate School of Business.

She held executive positions in major companies including Exxon Corp. in New York City and Houston; Raytheon Systems, Delta Airlines Technology, and GE Appliances & Infrastructure. At the time of her death, she was president of DMW Choice Consultants Inc. (previously D.M. Wood & Associates).

Daisy was life member of Delta Sigma Theta Inc. and served as national president of the National Pan-Hellenic Council and the National Finance Committee. She served as a board member for the Black Leadership Forum, the National Inter-fraternity Foundation, Rainbow/P.U.S.H. Coalition, Order of Omega Honorary Society, and Coalition of 100 Black Women-Atlanta Chapter. She was an active member of the Black MBA Association, National Urban League, National Council of Negro Women, Women in Business, Women in Aviation, American Society for Personnel Administration and American Management Association.

In addition to her parents, Daisy was preceded in death by three siblings, James, Shirley and Connington.

She leaves to cherish loving memories several nieces and nephews, including her “blessings,” Tosha, Mona and Jason (whom she raised as her own after the death of their mother, Shirley); other relatives and many friends.

There will be two services celebrating Daisy “Dee” Wood’s life:

The family is at the home of Tosha Cothrell, 108 Yale Street. The family requests that attendees wear red and/or white. Also, in lieu of flowers, please make donations to Dee’s memorial fund at http://fundraising.stjude.org/goto/Daisy_Wood