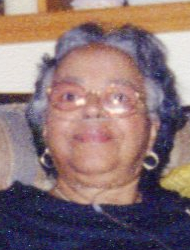 Widow of Leon P. Burroughs Sr., she was born in Washington, D.C., and was the daughter of the late Roland and Louise Taylor Richard.

Services will be held Sunday, April 5, at 5 p.m. at Kingdom Hall of Jehovah’s Witnesses with Bobby Jefferies officiating.

The family is at the home of Arlene and James Sanders, 100 Redwood Circle.