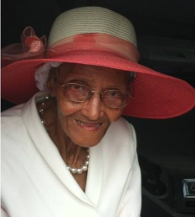 Widow of Julius Montgomery, she was born in Cherokee County and was a daughter of the late James Haskell “Hack” Dawkins and the late Rena Mayberry Dawkins.

She was a member of Mt. Zion Baptist Church.

Professional services are entrusted to The Gilmore Mortuary
www.gilmoresmortuary.com