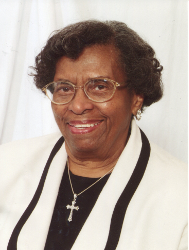 Eula Mae Johnson answered the Master’s call and was escorted into Heaven by God’s angels on Friday, May 13, 2016. She departed this life surrounded by her loving family.

Eula was born at 3:00 on October 25, 1931, on a sunny Sunday afternoon in Bailey, North Carolina. She was the daughter of Olivia Palmer and Charles “Boisie” Johnson. As a young girl, she heard stories of her family’s roots in Union and Spartanburg Counties in South Carolina, where they had been cotton farmers before they moved to North Carolina to grow tobacco as sharecroppers. Some of her earliest memories were of being placed on a loft in a barn and sitting there while her family worked below wrapping tobacco and doing other farm-related chores. To escape sharecropping for a better life, Eula’s family moved north and she settled in Philadelphia. At the age of seven years old, Eula’s beloved grandfather Hughes Johnson and loving grandmother Fannie Palmer Johnson brought her to Brooklyn, New York, to live with them. Her grandfather was an avid reader and some of Eula’s fondest memories were of her grandfather reading with her every night and discussing events of the day and other items, which led to her lifelong love of reading and her interest in a multitude of subjects. She graduated from Junior High School 35 and Franklin K. Lane High School in Brooklyn, New York.

As a teenager, Eula learned the bookkeeping process necessary for her grandfather’s business selling wood and providing moving services. She later worked as an assistant bookkeeper for the Ocean Travel Agency and for Popper and Popper Pharmaceutical Distribution Company before moving into the music industry in 1968, where she became one of the first Black and first female music copyright executives. She worked in a succession of senior music copyright administration roles at Fred Ahlert Music Group, Eastman & Eastman Music Publishing, CBS Songs/CBS Inc., and Williamson Music Company/The Rodgers and Hammerstein Organization. After retiring from Rodgers and Hammerstein, Eula relocated to Charlotte, North Carolina, in 1991. Not one to be idle, Eula worked at First Union National Bank, retiring a second time in 1998. She returned to work at RDS Electrical in Charlotte in 2000, where she retired for the third and final time in 2005.

From her grandparents, Eula learned to love God and her family, and to be of service to others – lessons she maintained and practiced faithfully throughout her lifetime. She was baptized at her family church, Brown Memorial Baptist Church, in Brooklyn, NY, where her grandfather served as a deacon. As an adult, Eula served as an elder at Hollis Presbyterian Church in Hollis, NY, and as an elder at New Hampton Presbyterian Church in Charlotte, NC. She worked with, mentored, and served as a liaison for candidates for ministry in the Presbyterian Church. Eula also served as a member of the Charlotte Presbytery Mission & Justice Committee’s Hunger Sub-Committee, where she identified non-profit organizations for financial grant support; a member of the African American Caucus of The Presbytery of Charlotte; and a member of the Presbyterian Women of the Charlotte Presbytery. In 2003, Eula worked on the mission team that established Samaritan House, a respite care facility that houses Mecklenburg County’s homeless who are in need of recuperative care, and she volunteered serving Samaritan House residents for many years. Eula also served as President of the NorWes Chapter of AARP in Charlotte.

Eula loved to travel and enjoyed many Caribbean cruises as well as trips with her family to Europe, South America, Asia, and Africa. She inspired her children, grandchild and great-grandchildren to be citizens of the world.

Eula was the beloved matriarch of the Johnson, Palmer and Gilmore families, and she ensured that generations of family members knew and appreciated our roots, our ancestors, and our history. She was never happier than when she was surrounded by her loved ones, and she was the glue in our family, organizing reunions and keeping in touch with relatives near and far throughout her life. She was truly a gift from God to our family.

Eula leaves two daughters, Iris Cumberbatch of Minneapolis, Minnesota, and Carol Cumberbatch of New York, NY, who thank God for the awesome gift of their mother; one grandson, Itua Cumberbatch of Newark, Delaware, who was treasured by his grandmother and who treasured her in return; two great-grandsons, Cameron Mason Saunders and Caden Matthew Cumberbatch, who were the joys of Eula’s life; one sister, Vivian Riddick, and brother-in-law, TJ Riddick, of Chesapeake, Virginia; two brothers, Oliver Ricks of Brooklyn, NY, and Graddie Ricks of Atlanta, Georgia; and a host of nieces, nephews, cousins, relatives, and dear friends. She loved her family dearly.

Eula’s life epitomized the words of the old spiritual song, “If I can help somebody as I travel along, then my living shall not be in vain.” She was a constant help to her family, to friends, and to strangers – indeed, she was an angel among us. She lived Jesus’ commandment to Love God and Love Thy Neighbor. She was a good and faithful servant up to the minute God called her home, and we are certain that she is now serving God at His throne in Heaven. And we know we will see her again.